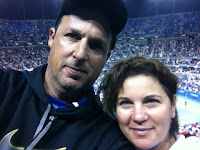 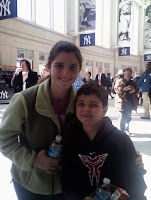 Since the days  I began attending sporting events as a kid one thing that I have noticed is the large amount of time spent not actually 100 percent focused on the event. Be it hoops,tennis,hockey,baseball,football,field hockey,soccer,softball and the list goes on.There is one common denominator at every sporting event I have attended......ME! So I say to all those people looking to possibly accompany me to a prospective game. WHY? Is the game that important? Remember here folks that going to the ballpark will require you to sit and talk to ME for three long hours.Think again.Sit  at home watch six episodes of Seinfeld or Everybody Loves Raymond and imagine me sitting next to you..Me in your ear.Me regaling you with tales of my past glories.Me eating Cracker Jacks and drinking Diet Coke with no ice. Me reaching for the Purell bottle over and over.Me taking pictures of you that may end up on Facebook or be sent somewhere into cyberspace.Get the picture yet? I am a lot to handle for three hours.Not counting the ride to and from the stadium! I would think twice before I accepted an offer from ME. God bless my wife for sticking with me for over twenty years plus the dating year and a half.That is a long game! We are in like the third or fourth inning of our marriage. It may go into extra innings if I am lucky.
But getting back to the day to day.As I sit here and ponder my next outing to a game I think there may have to be a criteria list that I come up with for you to follow. 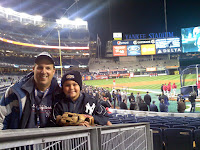 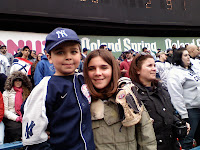 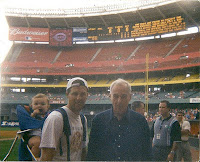 Can me and said invitee converse on a variety of subjects? Food,baseball,politics,women,kids,beer,beach vacations,cars,New York life,comedy and comedy films,wives,parents,tennis,old girlfriends(or boyfriends),pizza(not included in food topic),money,job issues,sleep issues,cellphone issues,computers..... Facebook,texting,email stuff oh and the game that is unfolding in front of our eyes.I would say that currently my nine year old has steadily been winning the golden ticket to accompany me to more games in the last year than any other ? What is the word I am looking for? LUCKY? ....UNLUCKY?
I am not great company folks but he has not noticed yet because enough other things are happening at the game. Loud music,video tributes,rowdy fans,cheering and greasy  food have all kept him distracted up to this point.My cool factor is still there but fading fast with him.
So if I call you,text you or send you an SOS   to take a trip to the old ballgame with me in the near future then run through your mental check list of things we may have in common and balance it out against the list of pros and cons of spending over half a good nights sleep on my private  island.
If the scales tip in my favor then welcome aboard the SS Weiland.If you see Gilligan,the Skipper or Mr.Howell then run for the exits.
If you see Mary Ann or Ginger then you are watching too much old TV and need an intervention. 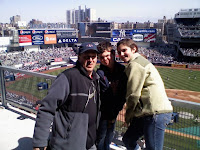 It's a LONG three  hour tour you are not soon to forget.
Posted by Island Of Weiland at 8:03 AM