My first Field of Dreams is a tennis court 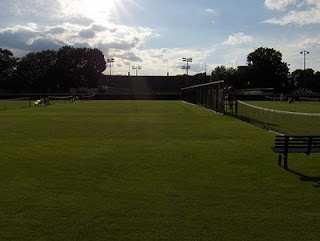 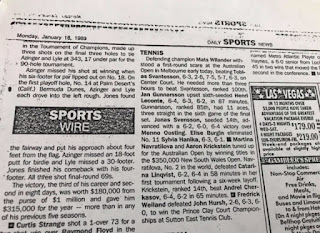 Press clipping from the NY Daily News after winning the Prince USTA/Eastern event on red clay in January 1989. In February I defended the title by winning the second event at Sutton East on the red clay. Not Roland Garros exactly but had a good win over a higher ranked player Edmond Plass in the semifinals in straight sets 7-6, 7-6. 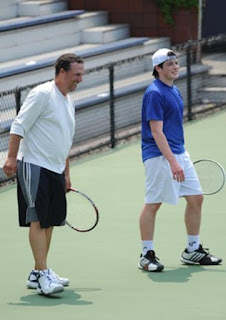 With Zach Jonas at the Billie Jean King National Tennis Center/ US Open National Playoffs in 2012
From USTA/Eastern Website:
"Fred Weiland, 51, of Mamaroneck, N.Y., was a former tennis pro in Port Chester, N.Y., and was injured in an accident four years ago. His doctors told him that he may never play tennis again, but he was determined to return to the courts. Through training and practice, he has healed and decided that the US Open National Playoffs was the best way to get back to his love for tennis; this event was Weiland’s second tournament since the accident.
Coincidently, in the first round, Weiland faced 18-year-old Zachary Jonas, of New Rochelle, N.Y. During the match, Weiland felt that Jonas looked like someone who had attended his New Rochelle camp years ago. The two opponents soon realized that they indeed had a history. For Jonas, the match brought back great memories of playing in that camp. And for Weiland, it brought him a sense of pride to see a young player that he once taught play so well years later.
In the end, Jonas defeated his former coach 6-0, 6-2, but both found happiness in finding each other and Weiland was satisfied returning to the game against someone he helped along the way."
Posted by Island Of Weiland at 9:00 AM 24 comments: