My road back to Baseball 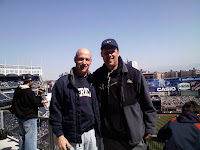 I took a bag of balls spread them out along a fence and did a running drill where I would sprint to a ball stop turn and fire it into the soft toss net about forty to fifty feet away.
I stood on the bullpen mound at our high school where the boys team had won back to back state championships in 2008 and 2009. I set up a tee at home plate at my sons suggestion and placed a ball on the tee. I trudged back to the mound sixty feet and six inches way and took my bag of fifty baseballs and took aim at the ball on the tee. At first that sixty feet seemed like a mile. Especially since the distance we played at under the bridge was forty six feet which is the Little League distance. We had always done long toss throwing of one hundred to one hundred fifty feet. But being precise from sixty feet ain't no picnic in the park.
I experimented with different grips and arm angles. I practiced pitching out of the stretch and windup.
One day I asked my son to bat with me pitching from the mound on the actual field and had him put on his catching gear and get used to seeing a catcher behind the plate.I was usually ready for a nap after most of these workouts.
I was able to knock the ball off the tee a few times and hit my son's glove with good accuracy.
Oh by the way I forgot to mention that his allowance got bigger in those weeks where he went on the field with me to pursue my dream. He even yelled at me like a real coach as he threw me ground balls and pop ups, he told me if I missed a ball I had to do push ups or run a lap.
People running on the track surrounding the field must have laughed as they saw an eleven year old barking out commands to his middle aged student.
On the weekends when I went to the high school field to hit into the soft toss net off the tee I always saw a local kid in the batting cage that had been drafted by the Yankees in the fourth round of the 2011 draft. For the last couple years we had gone to the cage at the high school and had seen this boy and his dad spend hours doing hitting drills. We always said hello and watched with awe as he hit with incredible precision and power. He looked like every second in the cage with his dad was fun.
He was living his dream. He had turned down a full scholarship at Fordham to play for the Yankees organization. I'm sure getting a good signing bonus helped convince him to play baseball.
He was also probably wondering why a middle aged guy was there hitting off a tee on a cold fall afternoon.
I was thinking that live pitching and hitting off a tee were not the same so I started going to the indoor cage two times a week and realized I had some work to do. I usually hit 160 balls from the pitching machines. Eighty pitches lefty and eighty righty.Starting at 50 mph and then moving to 65mph. My hands hurt pretty bad on the 65mph but eventually as my hands got tougher they hurt less.
I also went to the gym with a new purpose. Increasing core strength was my goal. Swimming helped my upper body core. I started playing squash which is mostly short sprints, lunges and squats that helped my legs and fast twitch muscles react better. It is a great cardio-respiratory workout as well.
I know some MLB pitchers that like C.aptain C.runch cereal that might benefit from playing this game.
No names though (see above initials).
I found this balance board thing in the gym that I used for thirty minutes every other day while drinking a cup of coffee. Then added some light dumbbell weights while on the board and simulated a pitching motion. Or a batting stance. As my week in Tampa approached I felt extremely excited and felt as if I had done everything in my power to prepare for the Big Leagues.
Then I said goodbye to my family and packed my bags for my trip to George M. Steinbrenner Field and the Yankees complex.
With my goals set as 1. being to be able to get a batter out as a pitcher and 2.to get a hit into the outfield and 3. to stay out of the trainer's room the entire week  I set out on my journey to "The Show". 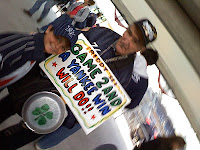 My wife in the cage 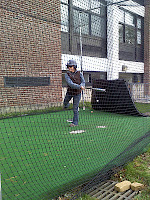 Some of my first tennis trophies 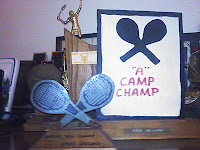 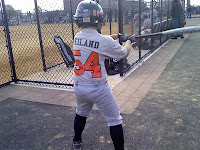 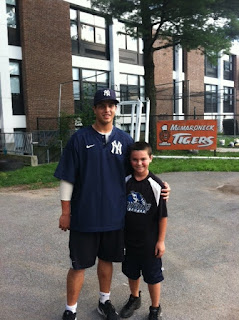 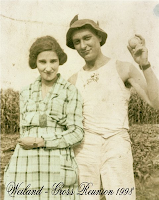 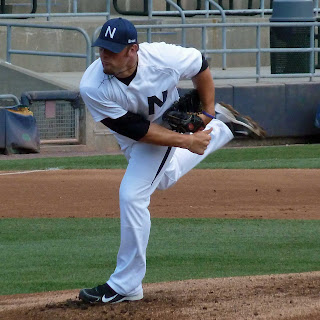 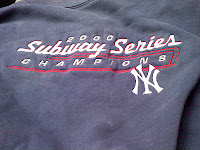 My son having a catch with Yankees reliever Buddy Carlisle 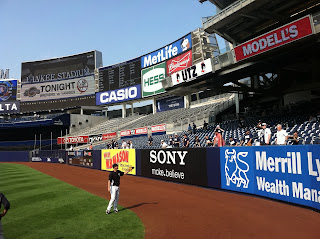 My daughter on the field at a Reds game in Cincy 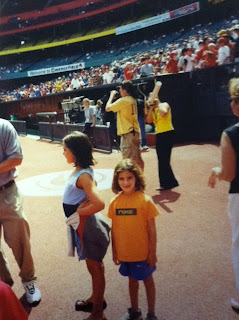 Posted by Island Of Weiland at 9:11 AM