Our time together as Champions 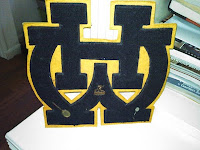 It was in the spring of 2010 I think when I got the very bad news that my high school friend and teammate
Craig Kurtz had died . All the memories of our youth together rushed through me in that moment.Craig was with my brother and me in 1989 when I celebrated my engagement to my wife.
We drank Champagne and laughed and over the next twenty years maybe we spoke one other time.
Craig always  made me laugh and reminded me to never take myself too seriously.There were times that we didn't see eye to eye.
That's to be expected.But we always were able to move forward.
Craig made me a better athlete and tennis player.We pushed each other pretty hard on the tennis court and sometimes off of it over the years.
It had been 31 years since we celebrated our graduation from Walnut Hills High School and the culmination of four years as Greater Cincinnati and Southwestern Ohio's  best high school team in our sport.Our varsity squad had gone to the final four at the Ohio Boys State Team event  four straight years. Craig and the other four year letter winner in our grade Dan Katz had been with me every step of the way.
I reflected over the next few days on how lucky I had been to be a tennis player and part of a team that had been so special.Every year our coach would predict a state championship for our team.
Most tennis people in Cincinnati didn't even pick us as favorites to win our hometown title.
It seemed on paper that our crosstown rival Princeton High School was the better team.They also had a large indoor tennis facility directly across from their campus where they could have easy access to free walk on junior court time.They had private coaches.They were like the Yankees and we were a bunch of ragtags,misfits and ne'er do wells!
But every season the boys from Walnut would figure out a way to win our big showdown at their tennis complex.One year there was even a parent from the other school that was so enraged that we won that he challenged one of our players to a fist fight. Good times good times.We all laughed at the outburst and  were aware how parents can ruin the sports experience  for their kids very easily.
We at Walnut were not exactly the model for a successful high school championship caliber team.
The fact that our coach knew nothing about tennis totally worked to our advantage.We always looked at our time on the tennis court as fun with our friends.We never felt obligated to play tennis.Obviously we wanted to win as badly as the next guy.When we were on the court we practiced with intensity and still enjoyed the experience.
Coach Moore and later Coach Cowit understood that tennis is an individual sport but we had to come together as a team for the common goal of winning at least 3 matches against the other school.
Since many of us on the team spent a considerable amount of time off the court together we really knew every one's inner workings and what made each guy tick.
I have been married almost twenty one years and my wife knows very well why and how I do what I do.
By our senior year of  1979 there were quite a few guys that could read me as well as my wife can today.
In the spring of 2010 one of those guys was taken away from my life.
We learn so much about our character through sports.Winning,losing,highs and lows.The great expectations of glory.The crush of humiliating defeat. The joy of playing and competing against ourselves as much as others.
In the years 1976 to 1979 there was one thing that we will always have to remember our time together.....
.........."We Were Champions"
Posted by Island Of Weiland at 10:48 PM