As a young boy I got shipped off for three summers along with my older brother Dave who went for many summers more than me  to northern Wisconsin to Red Powell's  Camp Golden Eagle in Woodruff.I had been a frequent visitor there as a young boy since I was four.So when my time came to follow in Dave's footsteps to camp it was a pretty big deal for me.
My good friend Josh Harkavy spent the first two summers with me at Golden Eagle and we shared a love for tennis and basically anything that involved sports.In our second year we were paired with a new kid who was from our hometown and the new kid and I got off to a rocky start when I came in our room and discovered that someone had taken my candy off my bed and eaten it.I don't need to explain the value of candy to a young boy of eleven.I might have "accidentally" dropped his guitar on the ground and we had to be separated by the other campers and staff.Eventually the other boy Billy Magnus and I ironed out our differences and became fast friends.He was a great athlete and had a sense of adventure that carried me along on some journeys that I can alternately laugh,shake my head and wince at how things could have gone from bad to worse.
When looking back I now realize that some things that we do in our younger years defy logic and directly put us in harms way.
As a parent I hope my kids exhibit better decision making and  don't sneak away from camp to go to A&W for root beer and burgers.Or sneak out of Hebrew school  at Rockdale Temple in Cincinnati and turn off the electric everlasting Holy  light (we may burn for that one).Or decide to drink whiskey and lemonade in the back of their brother's car before camp lunch.Or smoke a cigar after camp lunch. My friend always had some very unique ideas about how we could make the days more exciting.
Many times I did not go along with his plans especially if they interfered with my tennis or  a couple other sports.But there is one particular moment that will always stand out in my mind when I remember Billy.
It involved incredible bravery,absolute lack of fear and excuse the expression here folks: BIG BALLS.
It was a rainy stormy Sunday  night at camp .A counselor arrived to tell our large group in Cabin number ten which held about fifteen boys ages twelve and thirteen that it was reported on a local radio station that a prisoner had escaped from the Oneida County lock up and was spotted in a neighboring town.
We as a group fired off many questions and were told to stay inside and keep our flashlights next to us at all times and go to the bathroom in groups.We were obviously flipping out.Ten to fifteen minutes passed and the counselor gave us another update.The inmate was spotted on the main highway near our camp.It was at this point that I went into my trunk and grabbed the large six inch pocket knife that I had bought at an Army-Navy store in Cincinnati the week  before camp.I held the knife in my hands as I sat in stunned fear along with my fellow campers  and my bunk mate for the second straight year  Billy.As we sat there discussing our safety,our last few moments alive ,our fears of dying without knowing the company of a good  woman a gruesome face pressed up against our window and we all screamed as loud as a whistle at a factory at quitting time.
Billy reached over and without any warning grabbed the blade from my hand and headed out the back door of our cabin to confront and possibly hunt the escaped mad man.The rest of our cabin sat stunned as Billy bolted after the poor schmuck he was chasing.Imagine the fear of the counselor dressed in a Halloween mask that had attempted to scare the ever loving piss out of some young tween kids and  instead encountered one with the crazed bravado of a Marine raiding the beaches at Normandy.Billy could run like the wind so I can only imagine the other guy whose life was in danger must have sprinted away as if he were running through a
haunted cemetery at midnight.
Billy came back with the knife a few minutes later and had not caught his prey however he had earned the respect,admiration and loyalty of his fellow campers.
Over the years I  occasionally ran into Billy on my visits to Cincinnati.
A few years back he passed away and I felt like part of my childhood had died along with him.
I never had the chance to tell him how much I admired him for his bravery,his sense of humor,his athleticism.
He made me push the envelope on and off the athletic fields.He made me realize that it's okay to take chances and fail as long as you can learn from the failures and in the long run this has helped make me a better person.
I also think of him and laugh as I see him running out that door scaring the crap out of the counselor at Camp Golden Eagle.......Thanks Billy and rest in peace. 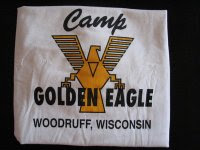 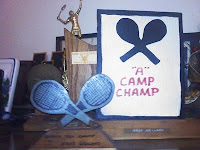 Posted by Island Of Weiland at 8:33 AM