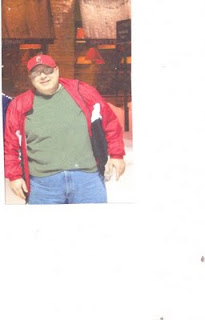 It was  early in  1973. I was a part of the Sunday basketball leagues at JCC in Cincinnati.I only remember one other player on my team.....Mark Goldman . I was all of 5 feet tall and probably 90 pounds. Goldy may have been a bit shorter and a bit bigger. I remember what he lacked in speed and mobility he made up for with good hands. Although I lacked speed as well . I could play good defense because I wanted to win to a degree that I would do whatever I could to keep the man(boy) I was guarding  from getting open. I was also used to competing in tournaments as a tennis player so whether it was long hours practicing or just spending hours on the court playing matches but I put a tremendous amount of pressure on myself to win every time I competed.
Right now I want to apologize to every single guy that I have competed against or played on a team with in my entire life especially Goldy. Maybe not everybody but definitely Mark Goldman.
Goldy died on Saturday November 28th ,2009 over the long Thanksgiving weekend. Just  a few weeks back he called me to catch up on our lives.The last time I had seen or spoken to him was 25 plus years ago . It was probably during my time as a Sammy at Ohio State University.
Keith Gud my roommate was most likely hanging out with us that night at a bar on High Street .
Good times were had by all.

But quite  a few years earlier Goldy  experienced my competitive personality firsthand on that winter  day in 1973. Our team was down by 7 points with somewhere in the neighborhood of 30 seconds on the clock.
Maybe it was extremely unrealistic to think we would come back but I did especially because  as a 12 year old sport fanatic I was  generally unrealistic  in my expectations .I still thought the Reds would win a World Series.I had just witnessed them fall short a few months back.Seeing Pete Rose fly out to end Game 7 against Oakland  was a heart breaker but .....those guys never gave up.
( see 1975-76 World Series Trophy on Pete Rose Way)
For some unexplained reason as Goldy our point guard brought the ball up the court he decided it was the right moment to set up at half court  and take a "Hail Mary" ....wing and a prayer shot. Goldy's shot was not  close and the other team got the ball back and eventually time ran out .
I flashback to the scene in The Bad News Bears when Tanner Boyle angrily snarls at Timmy Lupus after he drops an easy fly ball.
Now mind you Goldy was no Lupus. Goldy had skills.Lupus not so much.at all.
I remember yelling at Goldy .There may have been some four letter words.It is entirely possible that a 5 foot curly haired kid who weighed 90 pounds lost his temper enough to squarely punch a shorter stockier point  guard.
Unaware that the  said point guard had a mouth full of braces.The ensuing mayhem that took place on the first court at JCC must have looked ridiculous to all in the gym .Goldy was chasing me all over the gym.He was pissed.
I was pissed. I don't remember if he caught up to me.
One of us had a good sized cut on his finger.The other one a sore mouth .Eventually we made up and the season went on .We did not win the league that year.
When I spoke to Goldy during the 2009 MLB post season I had no idea that a few weeks later he would be gone forever.He wanted to get a group of guys together from the old JCC for a game of basketball or softball.
We talked for somewhere between 30 minutes and an hour and I think he had to go because he was on his way to referee a football game. He seemed to really enjoy the job .Plus he had a ticket broker business.
Goldystickets.com .During the Yankees playoff run I was on his site daily checking out his tickets and also thinking of possibly selling my seats through his website.
Goldy and I had connected through Facebook. I had asked him to post some pictures on his page.
He eventually did post some of himself. Sure he had gotten older like the rest of us  but It was good to see him as a grown  up man.
I know he had taken some knocks lately in his life and been through a tough divorce .But he was taken too soon .He still had  so much to offer.Let us not ever take our lives for granted.Goldy's death has further reminded me to "seize the day".
I still laugh  when I think of Goldy chasing me through the gym at JCC. Obviously not funny at the time but now 36 years later it ranks up there in my most memorable and humorous moments .
Goldy if I could right now I would pass the ball to you  anywhere on the court see you set up at and  heave the shot and pray for a swish or bank shot then celebrate with you as if we had won the NBA title for the Cincinnati Royals or the Bearcats of U.C.
Posted by Island Of Weiland at 8:46 PM