It was 1971 and I had just met Hubert H. Humphrey(HHH) the Vice-President of the good ol' USA under LBJ . At an after party for the event for HHH I was being introduced to many politicians and political "types" . I was getting a few autographs to accompany the one I got from HHH on his American Airlines ticket jacket . A younger adult came up to me and said,"hey you want my autograph ?". 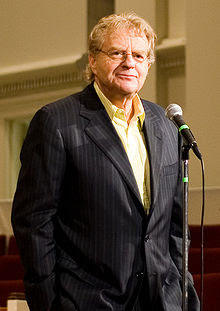 "Who are you?",I responded . Someone overheard our exchange and came up to fill me in .
"This is Jerry Springer and he is running for city council " , the guy explained .
I shook my head and as any 10 year old autograph hound would do I held out the pen in my hand and let Jerry sign .
Many years later Jerry would use that same hand to sign a check that would get him in a load of hot water but this "John Hancock" was most likely one of the first that Jerry had ever signed .
I still have the autograph tucked away in a closet somewhere in my house .
A few weeks passed and I forgot about Jerry and all things beyond the fourth grade that mattered to me at the time...UC Bearcat basketball, Batman and any type of  candy.
My dad came home from work and announced we were having a guest for dinner that night .
It was some guy running for city council and he was helping him raise money .
A little while later in walked Jerry Springer .No chants of "Jerry,Jerry".No Steve the security guy holding back crazy men going after the women they love after discovering they have been cheating on them with their brother's girlfriends .
I don't remember what we had for dinner.My mom probably made a brisket or chicken with herbs in a white wine sauce . Jerry eats with with a knife and fork just like every other civilized human being (not including Springer show bizarros).
Okay so dinner is ending and my mom who was an actress mentions that she is holding a Psychodrama theater workshop in our basement after dinner . She wonders aloud if Jerry would like to join in .My dad probably was not too excited to see this exchange between my mom and "The Ringmaster" take place . Jerry instantly accepted her offer. After dinner the theater people started filing in and must have been wondering why the guy who ran for U.S. Congress in the last election was in our basement as they entered their weekly angst fest .
I had to witness this class first hand so I plopped my ten year old frame on the floor and watched closely as the group was led through a series of "drama drills" I will call them .
At one point I remember seeing Jerry laying on the floor and I think they were telling us to pretend to be babies or something and I started laughing .I did not get kicked out so it must have been okay to giggle .
What if Steve from the "Jerry" show ran in grabbed me and pulled me out of the room?
Jerry left the class and I went back to my life of UC Bearcats,fourth grade french and pixie stix.
He got elected to city council that year and never looked back . Actually he looked back once a few years later cause he wrote a check to a "massage" parlor and got caught. My heart broke.Say it ain't so Jerry for the love of all things pure and decent in this world say it ain't so! Jerry? Did you ever hear the expression ?....... Cash is king!I guess not.
I was there the night in 1975 when Jerry got re-elected to city council after he had resigned in disgrace only a short year earlier . I remember Jerry and his wife only a few feet away from me as he tearfully made his acceptance speech.Cincinnatians are very forgiving people.
The years passed and I moved away from Cincinnati .Jerry moved on to become mayor then local TV anchor then the "Ringmaster".I moved on with my life focusing on college life(beer,girls,fraternity,Buckeye football),UC Bearcat basketball, and rock and roll (no more candy).
Jerry inspired me to get into politics as a young boy. I worked as a page in the Ohio Senate when I was a student at Ohio State .Then served as sergeant-at-arms for the Young Democrats .I even once contemplated running for the Ohio House of Representatives. Then I made my big move......I tended bar at the Governor's mansion.Then I got invited to an Inauguration party.I met the Governor and a famous Astronaut senator. I reached my 21 year old hand into my suit pocket for a pen and paper to get an autograph. A piece of Jolly Rancher candy was stuck to the paper(I guess I still was into candy)
I grabbed a cocktail napkin and like any 21 year old autograph hound would do I held out my paper and pen.
Posted by Island Of Weiland at 2:53 PM